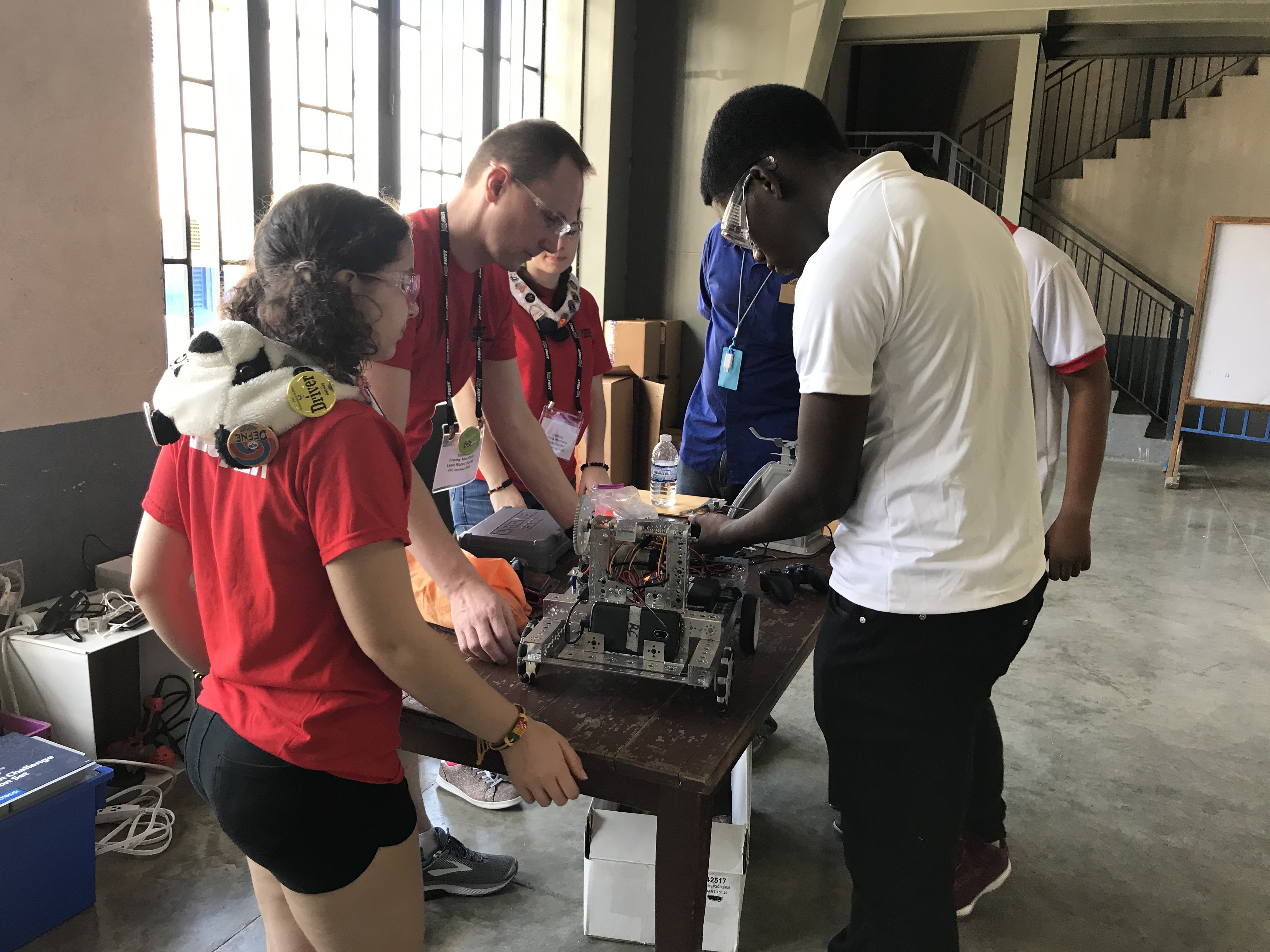 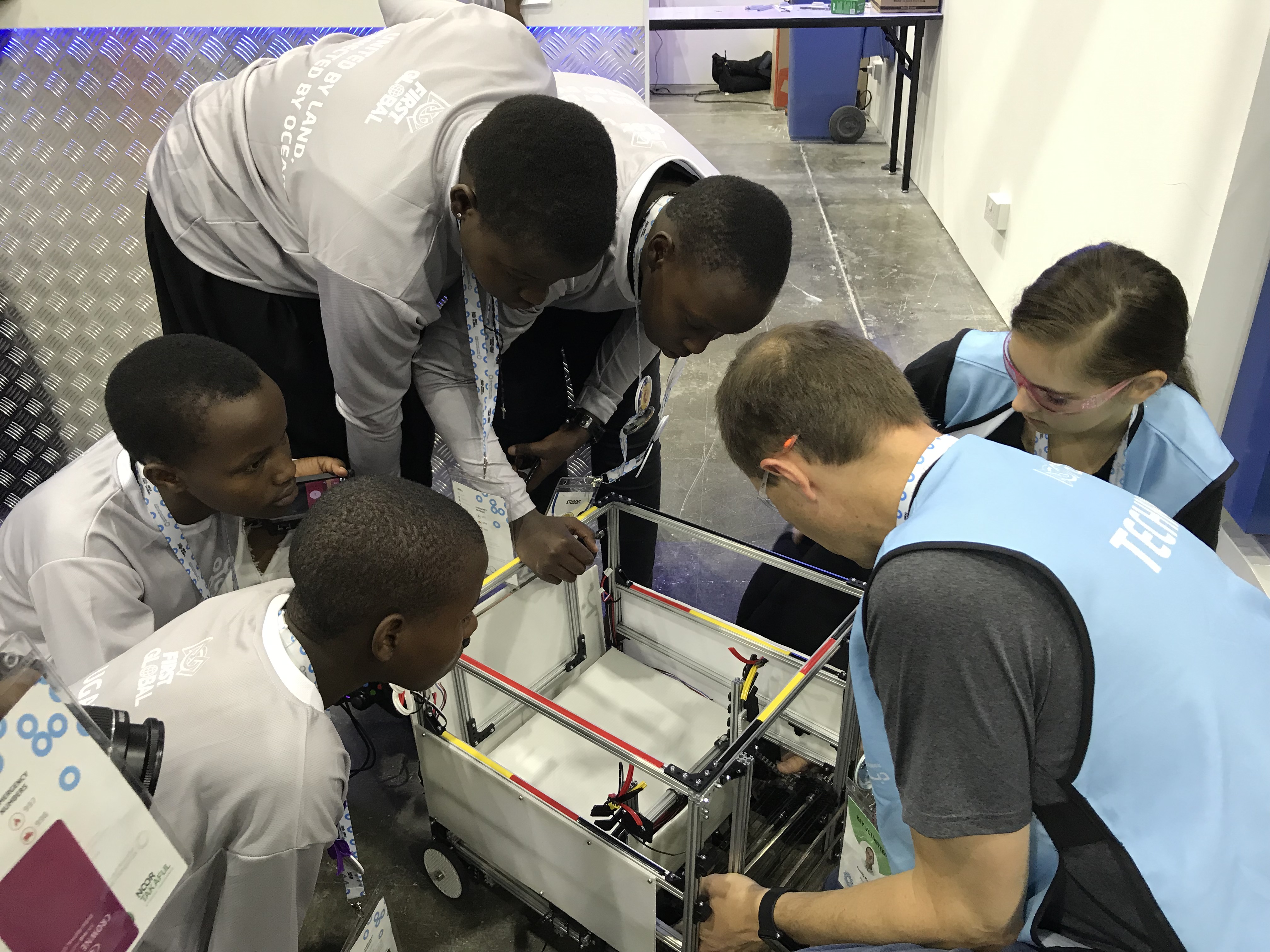 In our second installment of FIRST Families, we’re travelling all the way to southwest Virginia to meet the Marchand family. You might not recognize members of the Marchand family if you saw them without their signature panda hats, part of their commitment to branding FIRST Tech Challenge (FTC) Team 4924 The Tuxedo Pandas for the eight years that the team was mentored by Franky Marchand. The Pandas’ pit was always recognizable at competitions, with a stuffed panda in a hammock on a zipline above the workspace. As Chloe Marchand described it…“There were pandas everywhere.”

When asked about the impact of FIRST on the Marchand family, mom and devoted FLL, FTC and FRC volunteer, Isabelle, replied simply, “We don’t do anything else.” And, indeed, with everything the Marchands do to support FIRST programming on a local, national and international level, it would be hard to imagine them having free time for much else.

Franky and Isabelle Marchand, along with their children, Alexis and Chloe, got involved with FIRST programs the same way many families do, through FIRST LEGO League (FLL) when their elder child, Alexis (now 22), was only eight. The next year, Alexis wanted to return to FLL because it was the only extracurricular activity he really liked. When the Marchands found out that the school FLL team was full and Alexis would not be able to join, they did something that most families might not--the Marchands started running their own FLL alternate team out of their house. Even though he is an engineer, Franky didn’t initially intend to be a FIRST robotics team coach. He popped in on the practices to observe a few times out of personal interest, but that was enough to get him hooked. That was almost 15 years ago, and he’s been coaching or supporting other teams every year since.

With a goal of following her brother, younger sister, Chloe, joined an FLL team when she was ten, and as soon as she was 12 she joined FTC The Tuxedo Pandas. She switched to FRC for her final year of high school just to get the full FIRST experience and participated on the only FRC team that serves the Montgomery School District.

Alexis first got hooked on FTC after he got to test drive a robot at the FTC Virginia State Championship. The Marchands had already started an FLL team, and now they were going to launch the first FTC team in the county as well. They have since help start other FTC teams in the county. Franky noted that it was a tough transition from FLL to FTC, but they soon hit their stride and The Pandas earned a spot at World’s seven times in eight years, and the State Championship in all of the eight years. The one year the team didn’t qualify for World’s, Chloe went as a Dean’s List Finalist.

Alexis would go on to participate in FRC for three years as well, completing the entire continuum of FIRST programs, all available in their local community due to Franky and Isabelle’s commitment to starting and sustaining the teams and competition events in their Southwest Virginia community.

Though Franky and Isabelle serve multiple teams, providing funding, parts, and advice for rookie and established teams, they have taken their FIRST service a step further and taken the entire family to participate at multiple FIRST Global competitions as volunteers. The Marchands all love the experience of volunteering at FIRST Global. Teams come from around the world, and though each team is given the same kit of parts, the Marchands are always fascinated to see how different teams meet the competition challenge in their own ways.

At FIRST Global, many teams arrive having never used the robot kits before. With only three days to build a functional robot, that makes knowledgeable and experienced volunteers like the Marchands critical. Alexi and Chloe, the younger Marchands, serve with the “Flying Squad” at FIRST Global, the volunteers who go into the team pits to lend a hand with Franky at the helm as the leader of the Flying Squad. Alexis has also been a robot inspector at FIRST Global. Chloe pointed out that her ability to speak French made her an even more valuable asset as a FIRST Global volunteer. At one point she was translating from French to English so that another translator could translate the English to Spanish. But, as Chloe says, “Robotics is an international language.”

In addition to coaching, Franky’s volunteer roles range from robot inspector to referee, to field manager. The only volunteer role that doesn’t interest him is judging, “because a judge doesn’t have tools in his pocket to help the kids.” Isabelle’s key volunteer roles include serving as an FLL and FTC event director (usually two events each year), judge, judge advisor, and, at FIRST Global, as a robot clinic leader and representative ambassador.

The Marchands love to travel together and think that volunteering at FIRST events, especially FIRST Global, is one of the best ways to spend time together as a family. Alexis and Chloe both credit the years they spent involved in FIRST programs with helping them to build communication and teamwork skills. And FIRST experience helped Alexis discover what he wanted to professionally—currently he works in engineering design technology while studying electronic engineering.

The Marchands are, without a doubt, a true FIRST Family. 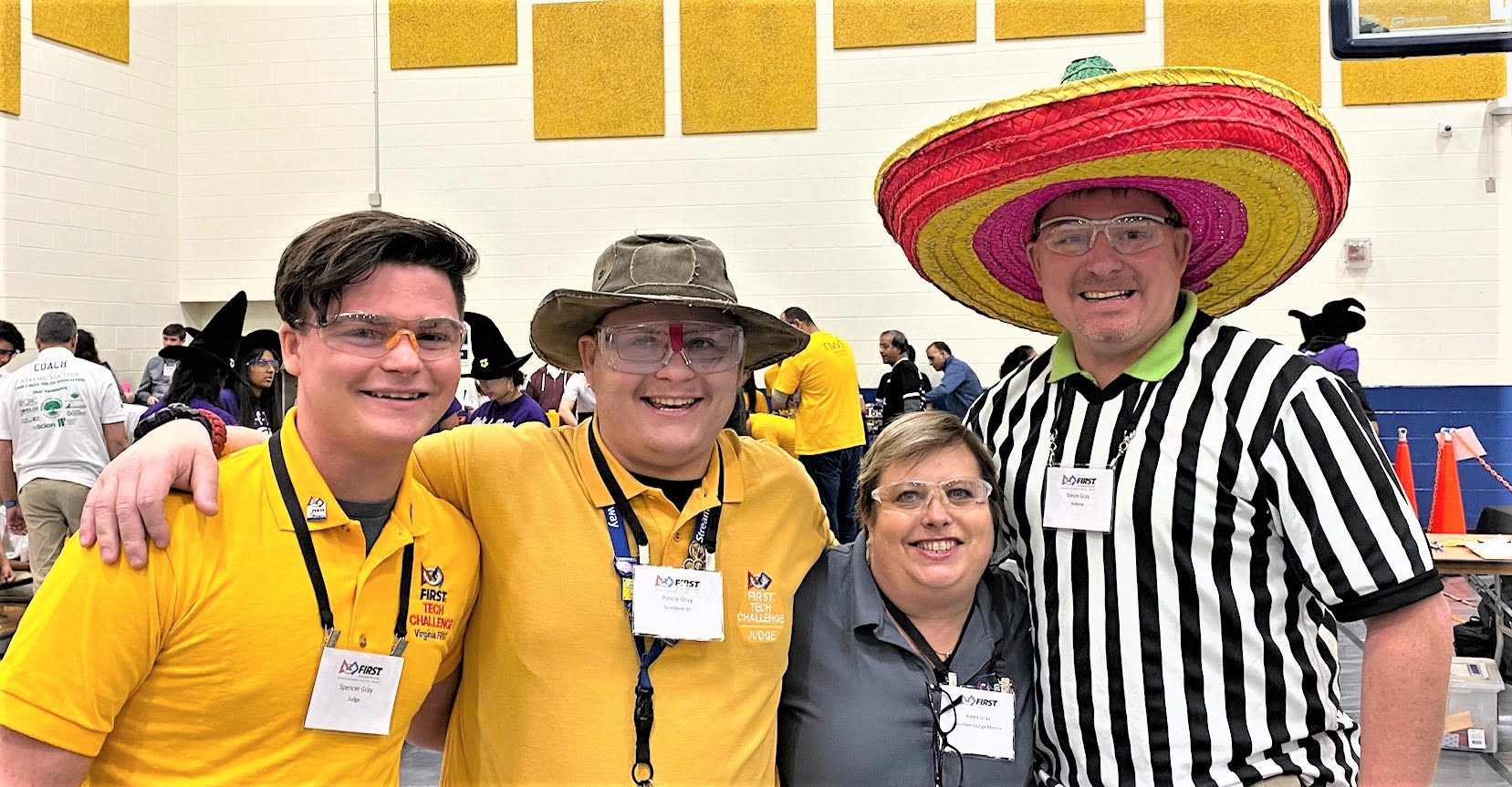 You probably know who Simon Gray is, even if you don’t know you know him. He’s the “guy with the hat”—the head referee on the field at many FIRST Chesapeake FTC Qualifiers, usually in a colorful sombrero that has become his signature. But his flair for accessorizing isn’t the only reason why Simon is a notable member of the FIRST community. His work on behalf of FIRST robotics, especially in his adopted hometown of Orange, Virginia, is hugely important.

The Gray Family is only a four-person unit, but they take on far more than four roles within the FIRST community, and on a truly global scale. The Grays are a tightknit family and like to share the same hobbies. When the two Gray brothers, Pierce and Spencer, who never had much enthusiasm for team sports as kids, got involved in robotics, it became a passion for the entire family.

It began simply enough in 2009 when elder son, Pierce, was sitting with friends in his school cafeteria, studying a 4-H brochure for a LEGO robotics program that was run out of the local church basement (later the program would take up residence in a barn). Pierce had a friend who was already into robotics and their mutual love of LEGOs was the foundation of their friendship. FIRST LEGO League was a natural fit.

Parents, Simon and Alexis, got involved soon after, with Simon taking on duties as a coach for Pierce’s FLL team, and Alexis as a parent volunteer, driving team members to events and assisting the coaches during the build season. After her first experience at a competition was just to sit around waiting for her son’s team to compete, Alexis walked up to the local event coordinators and asked how she could help. She started with the task of volunteer check-in because that way her volunteer duties were finished by noon and she could spend the rest of the day watching the teams compete. Over time, her volunteer roles evolved until she was (in partnership with Simon) the local event manager, overseeing every aspect of planning for the annual FTC Orange Qualifier.

When their eldest son aged out of FIRST LEGO League, and there was no FIRST Tech Challenge program available locally for Pierce to continue his journey with FIRST, Simon Gray created the first FTC program in Orange and ran it out of his house. Through the Grays’ advocacy and enthusiasm for FIRST Robotics programs, the entire continuum of FIRST programs in now available to every student in the Orange school district. Simon secured partnerships for all of the teams in Orange through his employer, the U.S. Navy’s Naval Systems Command (NAVSEA) and Orange County has made major investments in STEM and robotics for their school system, also a direct result of the Grays’ work to promote FIRST programs.

Though elder brother Pierce was the inspiration behind the start of the Grays’ journey with FIRST, younger brother, Spencer, is a FIRST celebrity in his own right. Spencer says he never imagined himself speaking in front of large crowds, or really being a public speaker at all, but now he’s a seasoned game announcer, easily and comfortably engaging audiences at FLL and FTC competitions. Spencer has evolved to emceeing at Super-Regionals to being invited this past year to the World Championship in Detroit.

Simon and Alexis both invested a lot of time and energy in their sons’ many years on FLL and FTC teams. For Alexis, who is a firm believer in the value of FIRST, the impact that the culture of gracious professionalism had on her sons and the way it translated into their everyday lives was what impressed her most. Both Pierce and Spencer, now FIRST alumni, follow their parents’ example and continue to serve as volunteers—Pierce usually as a referee or hardware inspector, and Spencer as a mentor, game announcer and emcee. As a mentor, Spencer loves experiencing the “a-ha” moment when a concept or solution clicks in place for one of the students.

When Spencer and Simon discovered the experience of volunteering at FIRST Global, they knew they were hooked for life. Each year at FIRST Global over 190 country-representative teams participate (that’s more teams than participate in the Olympics). The Grays love FIRST Global because it is the great equalizer in robotics—every team has the same parts, the same limited time to build a functional robot. And FIRST Global, like everything else the Grays do with robots, is a family affair.

While volunteering as a robot inspector at FIRST Global in Dubai, Spencer marveled at the Mali team’s robot, put together with duct tape, zip ties, and corrugated plastic. It was an eye-opening experience for Spencer, to see teams from such a broad range of backgrounds, some with very limited means, who still showed up and played their hearts out. While robotics started as a means of connecting the Gray Family with each other, over time, it has connected them to the entire world.

Families like the Grays are helping FIRST Chesapeake and FIRST do what we do best – build tomorrow’s technology leaders!

In case of Inclement Weather the day of
a FIRST Chesapeake Event,
Please call (804) 404-6653
after 5am for updates